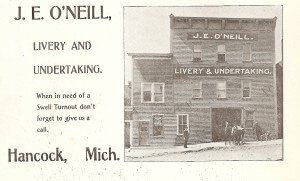 In 1905 Jeremiah O’Neill became licensed to practice funeral directing and embalming at his combined funeral home and livery stable on upper Tezcucco Street in Hancock. Jeremiah, his son Emmett, and grandson, Robert E. O’Neill were 3 generations of funeral directors who served local families in both their Hancock and South Range funeral homes over the years. In 1985 Mark Dennis bought the business from Bob, and has continued to serve local families since that time with professional and courteous service, The funeral home is locally, family owned and offers full funeral services, cremations, memorial services, monuments and marker sales, and limited pet services.

The current building at 214 Hancock Avenue in Hancock began as the Congregational Church parsonage, being built in about 1856 and is believed to be one of the oldest structures in the city (The Vollwerth Sausage business was the location of the church). On April 15, 1869 a disastrous fire burned 180 dwellings in Hancock, including the church, but the parsonage was spared. In later years the Vollwerth family bought the properties for their family home and sausage business until Bob O’Neill bought the current funeral home building in 1954. In 1985 Mark Dennis bought the business from Bob, and has owned and operated it since that time.